Messed Up! But all for love by Arvind Parashar

Review - Messed Up! But all for love

Book Name : Messed Up! But all for love 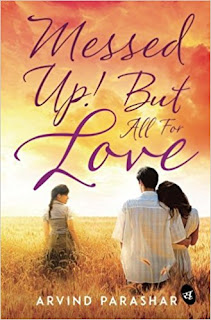 My View :  The title of the book is amazing and the best thing is Cover has also well designed and it looks very attractive. The language used by the author in this book was too good, the author also had well described the conversation between male friends. steamy scenes and twist and turn will force you to stick with the book till the end. the author had narrated a story in an awesome way, the plot was beautiful.

It is too easy to be in a relationship and then starts to date each other, usually at this point couple enjoying too much also feel something yes this the best way to be fall in love and get marry and start to live the happiest life, but it is not compulsory that every love story could be so nice and good. apart from this couple should have trust on each other, you should not judge your partner after listening something bad about them from the person whom you hardly know.
after losing a trust from each other it becomes too hard to keep all the things very nicely for both.

This is how exactly things kept growing and happening in Neil and Gauri’s life, They plan a trip with their best friends, met a couple, the bond grows well with them so does the misunderstanding between the couples enhance.

What do you do after so much of misunderstanding, the possessive wife who is beautiful, dedicated, hot and passionate?
How does the story revolve around?
Will they part lives?
Or things will turn all good?
To know more, read this beautiful fiction book

Blurb : Neil is a senior executive working with a leading brand name and his wife Gauri is a dentist running her own clinic. They are a loving and doting young married couple, living a life of comfort in posh suburban Gurgaon. Neil's fitness consultant Srinya seems to be stirring some trouble in their lives, though.
Drishti is a TV news anchor and journalist and her husband Somesh, a top cop. They are bored of their mundane busy lives, until a chance meeting with Neil and his friends in Cuba that changes everything.
To add sanity and madness to their lives are the funny and mysterious set of friends - Tom, Jerry, James, Mehr and Antriksha.
The havoc ensues when Drishti gets abducted and Neil is framed for it. Gauri finds out some bitter truths and leaves Neil. But what really is the truth?
When facts finally surface, we will know how much these lives are Messed Up! But All for Love


About the Author : Arvind Parashar is an author and painter hailing from Dehradun. He has been a corporate leader in various firms like GE, Dell and Genpact. He enjoys road trips and gives motivational lectures at various educational institutes.


Buy amazing book Messed Up! But all for Love

Email ThisBlogThis!Share to TwitterShare to FacebookShare to Pinterest
Labels: Arvind Parashar, Book Reviews, Messed Up But all for love, Srishti Publications 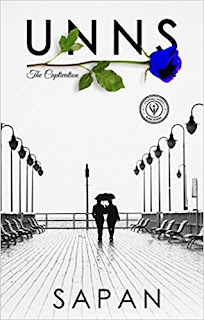 Blurb: "Of course you know about the seven stages of love, but have you ever lived them?" Atharva Rathod and Meher Qasim. Lovebirds since adolescence. Bonded by love, separated by circumstances. They part ways only to meet again. But this time, he is on a secret mission... Are they in control of their own destiny, or its their destiny which is making them dance to its tunes? Only time would answer, as Atharva and Meher unwillingly and unknowingly transcend the seven stages of love. A quintessential tale of love and romance marked beautifully by its own rustic old school charm.

Summary: Book gets started with Atharva's Diary with a chapter named Meher, in while reading this chapter you will get know speciality of why Author wishes to keep it as Chapter 1, at the start this book will take you in your school's memories, how we behave in the school, and fell in love with girl, our friends circle.
This is a story of Atharva Rathod & Meher Qasim, Atharva has a Friends called Sanjeeda, Shobhit, Shruti, & Rachit. Meher was with Ruchit and Sanjeeda, Atharva Committed that He likes Meher to Ruchit who treat Meher as sister even Rachit warn him about Meher as Meher was a one of the serious girl and she almost lost her smile. but Atharva hasn't any idea about Meher how she is looking. Their first meet was happen in different way where Atharva was  monitoring the office Area and there one 12 year old who tried to enter sports room, but Atharva doesn't allows him to enter to sports room, and suddenly Atharva heard a voice of girl with a Statement "Excuse me! I had sent him to bring the sports gear."  and he looked around and he found a slim girl with a round petite face with eyes the colour of hazelnut Dressed in the all white school uniform, but then also Athrava doesn't allows him to enter the sports room they had little debate on that as they both were captain of their team,  Meher entered in to the office room to meet sports teacher and she returns with a sports teacher out teacher allows them to enter sports room and she walked away with a other student, and after meeting Rachit he got to know that the girl who were debating with him was none other than Meher.
on another Day they met again and Meher asked him that is he told to Rachit that he loves her Atharva agreed easily, she wanted to know why He explained what he feels about her, Meher also got impress with his talk. and from that time the Love story of Atharva and Meher gets started they talk, they meet in school, they stays connected on facebook and other way. at the teenage they fell in love with each other. but Meher's mother got to know about this and for Meher her Parents are everything she can't go against parents her Dad was in Army and she lived with the mother and brother, and result of this Meher stops talking to Atharva she explained everything to Atharva. and there Love story got break. Meher gone to Germany to her aunt. her Atharva still waited for her but she didn't came.
Have you ever heard about the seven stages of love in urdu?
They are:
Hub
Unns
Ishq
Aqeedat
Ibadat
Junoon
Maut
Unns means the stage of infatuation when people think they are in love but they aren’t; it’s merely attraction and captivation.

After 15 years Atharva turns as an RAW agent and worked for country secretly, on mission he got injured but also brought a Lead his seniors decided to sent him on different mission to the Germany he went there and started working on the mission as directed by Seniors and He met Meher his first Love of his school time they connected again they both felt very happy as they met, and they stared to meet to talk on phone etc.

well i think if i continued with it then may be I'll reveal all the suspense so better you read this Awesome tale by Ordering from Amazon to know is their love story gets success or not?, is Atharva and Dev got succeed in the mission or not?.

Positive Point: The Plot of this book is Awesome Author did a great jobs his writing will force you to turn the pages till the end as he kept a many twist and turns in every possible way, you won't be bore while reading this book.

Negative Point: Cover of  this book could be more interesting it's very simple, but it's only matters for the readers who buy books just because of the cover.

Recommendation; I Would like to recommend this to the readers of Love Stories with little twist and turns.

Get Your copy of UNNS-The Captivation by Sapan Saxena

Sapan Saxena is a software engineer by profession and an author by choice, Born in the city of Nawabs Lucknow, he earned his Engineering degree fro m MNIT Allahabad. Sapan started writing when he was coding for a complex algorithm and found that a fictional story would at least make some sense. Currently based in Nashua, New Hampshire, he is the Author of the highly acclaimed FRIENDS KEEPERS,  UNNS-The Captivation is his 2nd attempt at writing fiction.
P.S.- This Book is Provided by Shelo Aura & Banaja Prakash in return of Review
By Rishikumar Thakur