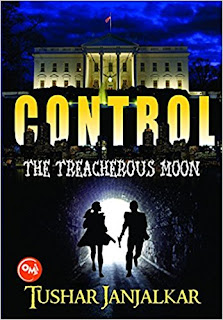 This is the first book of Tushar i must say Tushar did a really great work. He wrote beautifully but the concept of the book and book cover slightly not matching as it's a thrilling suspence book cover could be more intresting but it's okay as never judge a book by it's cover, inner beauty matters.
Story starts in Beautiful place which is GOA, with a marriage ceremony where one couple getting married after two years of Long Distance Relationship, but on the wedding night they died mysteriously.
The the story starts to run on it's origin way, where team of scientists are researching on a concept of an Device which is capable to control by thinking only with the help of wave frequency of the brain. But suddenly that device got stolen by Anonymous. From a tight security with that incident one more incident happened with Head Scientist Dr. Richard and he fell into Coma, and the other scientists who were researching on this concept they also started to murdered one by one in a mysterious way which will surely thrilled you.
Hence the case has been handed over to two top brilliant detectives of police side John and Alex, the faced many difficulties while solving this case connection between all murders and Dr. Richard and so on they were solving this case with the help of Dr. Disha, a neurologist who's working with Dr.Richard. on other side John fallen for a Disha.

If you want to know, is they succeed in case if yes then how? How & Who managed to play a big role play in this thrilling story? For that you have to read this thrilling novel.

Blurb : They say your acts resemble the machinations of your thoughts. But the great question is: Are your thoughts, your feelings really yours?
The financial capital of the world, New York, is terror-stricken. Death is crawling forth from the sewers, every full moon nights. On each occasion, an Indian is found involved and the diplomatic relations between the two countries are at breaking point.
NYP detective John is continuously failing to track down the true perpetrators behind these incidents. The situation worsens when John's case causes a threat to his love, Disha, a neurologist. Alongside, her security becomes his priority. When Disha learns that it's not just her life at stake and her own past has united with the present in the cabal to ruin the future of many lives, she secretly sets out to uncover the mystery.
Will Disha and John succeed in their journeys? Or will end up losing everything including their love? And above all, will the secret of moon ultimately be revealed?

To get all the answers read the book by ordering from Amazon:
Control- The Treacherous moon 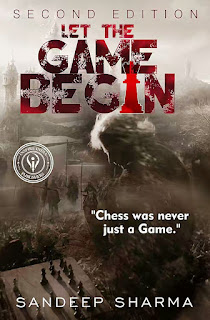 This is the first time I'm reading a Sandeep Sharma's Novel. I must say Author did a really great job, The story is about the two warring kingdoms, Sarprakt and Chaturanga. Chaturanga was a fertile and prosperous land whereas Sarprakt was land plagued by poverty and hunger. But Sarprakt had an ambitious king who wished to capture the land of Chaturanga over a mysterious mountain that separates the two lands. The king of Chaturanga finally bears an illustrious son who was destined to become a great warrior, is trained by his own father. But the king, an overprotective father does not entirely believe the prophecy and trains four more of his country’s best warriors to form the Panchdhar, a battle formation which would protect his son at the cost of the four others. But in Sarprakt, a deadly conspiracy is being hatched to murder the only son of the king of Chaturanga and thus invade over the kingdom. Finally, the plan comes into action and the prince is killed in war as his fellows betray him. The king falls into depression and something gets inside him, a curse, that beckons him to kill people all around to find who killed his son. He is introduced to the game of chess a mysterious immortal man to replay the scene at the battlefield. The story goes on like that interwoven with the present which was something that I really liked.
Back to the present, a couple of characters are involved as a sudden ‘Chess Murderer’ is going around on a killing spree, murdering seemingly unconnected people but leaving behind a chess piece and a box along with a note in a strange language. As bodies begin to pile up, several characters come into the scene namely Surya, Pratham and Dinesh Gandhi. The story continues as 4000 year old characters are reborn in the present and there’s one with the ‘curse’ who is going around killing the men who had conspired to kill his son.

I do not wish to reveal further as it would destroy the entire story itself. It is a must read for all thriller lovers!!

About The Book: Two kingdoms, Chaturanga and Sarprakt, separated by a mystic mountain range are at war with each other since ages. Chaturanga, ruled by King Viratha, is soon bestowed with a dynamic heir, and the whole kingdom is drowned in rituals and festivity. On the other side, Sarprakt is executing a cruel conspiracy. King Viratha, crippled by the conspiracy, urges the mysterious man of the mountain to devise a method to recreate the conspiracy and that gave birth to 'The Game of Chess'. Serial killings shock the nation as the police are rendered clueless. The killer leaves behind a trail of chess pieces with a strange message. Random people are murdered. Connoisseurs of different fields - History, Chess and the Security forces - have united as the next intended victim is the most powerful person of the country. How is Chess involved in the whole scenario? How will they find a man who died 4000 years ago? Can a person defy the laws of nature? Does history really repeat itself? Those who cannot remember the past are condemned to repeat it.