Be My Perfect Ending by Arpit Vageria

Title: Be My Perfect Ending

Blurb: Not every story has a happy ending,but is a perfect ending all that matters?Armaan is a young television writer and seems to have it all – a dream job, ample money and a good place to live in Mumbai. Despite all that, his heart lies somewhere in his hometown Indore. Merry and beaming through all of life’s ups and downs, Sara is a little desolate and now needs a different space to rethink her life as she joins a leading television channel in Mumbai.Armaan and Sara meet in FILMY style and quite obviously then, cannot help but fall in love. The passionate new romance in his life throws everything else aside, but little does he know that there’s a storm headed their way. Walking together, they stumble upon long-buried truths, shocking new twists and tough decisions. Be My Perfect Ending is a story of love that knows no bounds, of endings that are far from ordinary and new beginnings that hold a promise of LOVE.

Review: This is the fourth book of Arpit and the first book for me which I have read.and I'm much impressed with the work of Arpit, he had packed all the things which make this book more interesting.Let's talk about the cover first, a book should not judge on the basis of its cover but the cover of this book is damn attractive. If I talk about the content of this book then in this book you will read the story of Armaan a writer who writes for one television show and living in Mumbai his flatmate was much of a party person and totally opposite from Armaan. But when Sandy needed emotional support, Armaan was always there to helped him, thus making the bond stronger with time., and the situation of the first meeting with Sara a new supervising producer.  Sara had rejected entire script of one episode which was written by the Armaan and suggested him to rewrite the entire episode as Script wasn't up to the mark as per Sara's point of view.Armaan could not do anything else he had to rewrite the entire episode.Armaan was much curious about the first meeting with the new Supervising Producer who rejected his Script.Somehow story runs with a flow and at one point Armaan and Sara became friends and then the love story gets started,  Armaan and Sara meet in FILMY style and quite obviously then, cannot help but fall in love. The passionate new romance in his life throws everything else aside, but little does he know that there’s a storm headed their way, Sara a beautiful girl who lost her parents and Armaan who is living far away from his mother but whenever he feels low he calls his mother to feel good.but then after sometime one thing happens between Armaan & Sara to know what? you must read this beautiful book by Arpit Vageria.without revealing much from this book I'm ending my review here but I must say one this about this book, a page-turner book for me and I'm damn sure for all readers too.


About the Author: Arpit Vageria writes scripts for Indian television for a living and writes romance stories for the love of it. He is the bestselling author of three such novels - You Are My Reason To Smile, I Still Think About You and Chocolate Sauce - Smooth. Dark. Sinful. - that talk of love and its sheer power to win over all odds 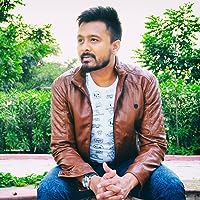 Get Connected with Arpit via Social Networking