Things were never the same for five ordinary individuals who got struck at cross roads and there was no way they can run back. They had no other choice but to take a plunge into their deepest fear and leave the rest to destiny. Their characters was tested out of their comfort zone and it witnessed abstruse results; a PhD scholar fights to win a pizza making contest and a tennis prodigy running for his life in a war torn , bloodied Island.

Extreme circumstances and their consequences made these ordinary individuals extraordinary . Was the test imposed on them by someone? Or did they invite it on themselves. The Blue Moon Day is that Once in a Blue Moon day story which questions an individual’s priorities, ridicules the worldly routines and finally redefines happiness. 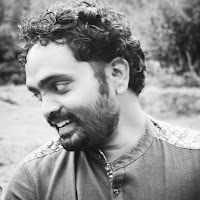 Santhosh Sivaraj , a banker based out of Chennai ,started his career as a sailor and eventually ended up wearing many hats in life including that of a teacher, entrepreneur and a trainer. He considers the journey of life to be the destination in itself and that pushes him to seek newer avenues in life every now and then. Absurd Economics interests him and he loves doing standup comedy. He laughs at his own mistakes and loves life unconditionally.

He believes in seeing with the mind , writing with the heart and living through others. This way he says one can live more life per life.