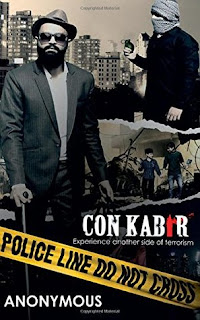 Con Kabir, i never thought to read this kind of amazing book, as i only prefer to read Romance genre Books normally, this is first time i read this kind of thrill book. I never thought this book can make place in my favourite book’s list, well I must say Mr. Author has done many research against Mafia’s, and for all those things which related to this. Story of book start with two childhood friend called Kabir and Ali, Kabir were Indian and Ali were Pakistani boy, they lived in Australia they are very close to each other, but as you know still in foreign countries there People’s has very bad point of view against this two countries, which also effects on people’s of this two counties who lived in foreign countries. They never thought to cheat people, but there was something happen with them which changes their mindset against People’s, and they became CON. In this book many serious issues are mentioned which were not disclose to common man.

About The Book :
A messiah will be born to fight evil that will find and destroy the rich, greedy and vain. He will gain your confidence long enough to get his hands on your money and make you believe he is an old friend that you have not seen in years. A rampant con game is being registered in the country, targeting mainly NRIs. They have been conned by different con men either by a tourist guide, a real estate agent. The scams range from street cons, business cons, internet cons and some home improvement cons. The twist in this con game happens when ACP Malik the investigating officer, gets prior strong evidence about the next planned robbery of that con man. However, he realises that all the clues seem to be coming just to him. Is this because of his hard work or has he been tricked into some con game?
The plot rebuilds when the identity of the con man reveals as the secret service officer of the Indian government and all of his cons were found to save the life of a terrorist. Who was this terrorist?

Do read This book To Know More By ordering from Amazon