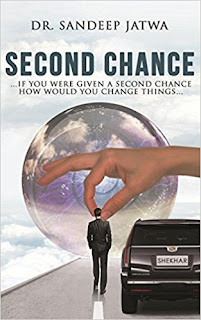 Blurb: Shekhar Kapoor is a successful businessman who has never done a decent thing in his entire life. For him it is all about what he can get and how fast he can get it. He goes through life cheating and insulting people, even after he receives a mysterious telephone call from what is called the City of Justice. Ignoring the cryptic warnings, Shekhar continues to live his life as he pleases, until one day, shortly after insulting a beggar in the street, Shekhar crashes his car and is killed. And it is only when he is standing before the Bookkeeper, and being shown where his life had gone wrong, that Shekhar finally understands what life is all about. But is it too late for him? Can he be given another chance, to undo all the wrongs he has done? Or is there a chance that Shekhar Kapoor can find redemption where there had previously been no hope?

Review: Firstly I would like to talk about the cover, the cover of the book is unique and well designed.
The story is totally based on an imagination and the title is perfect which matches with a story, From the first page the book is purely a page turner book writer has done a really great work and the story is just amazing.
Characterization is also important in every book and I must say author had well maintained the every character.
Now come to the story, this is a story of one successful businessman called Shekhar Kapoor, who is quite a different kind of person who runs a family business after his mother 's death and Father got paralyzed. and he was doing great with his business.
One day something happens with him and that was worst experience for him while driving he got a call from the city of justice for his wrong behavior he always insulting people around him especially a worker of his Own company who's name was Kailash. and that's why he got warnings for his wrong doings. and after getting the warnings he doesn't make any changes in his behavior, he always blamed his father for his mother's death and that's why he doesn't even talk to his father and daily just confirm that he is alive or dead.
Does Shekhar changed himself by doing right things?
Does he stop insulting others?
for all the answers you have to read the book well, I think I will reveal all the inside story of the book so better to stop here.
do order and read this unique book with the unique concept by ordering from Amazon.

About the Author : Dr. Sandeep Jatwa was born in holy city Ujjain and grew up in Dewas, in the state of Madhya Pradesh in India. He is married and still lives in Madhya Pradesh today. Having attained an M.B.B.S. from MGM Medical College, Indore, Sandeep went on to secure a job in medicine and now works at the Government Hospital Sarangpur District Rajgarh. He has an amazing imagination and spends much of his free time dreaming up stories. He has been writing since 2006 and has completed two novels. The first has yet to be published, but his second one, which he self-published and is entitled Second Chance, is an exciting and moralistic tale of how one man comes to realize the error of his greed. In his free time, Sandeep likes to relax and spend time with his family and friends. He is also a food lover and enjoys trying new and exciting dishes. Sandeep's most urgent wish is to be able to educate children who work in the street and have little opportunity to make something good from their lives. He believes that everyone's childhood should be awesome, and not a struggle.