Review of KANSA by Prassant Kevin 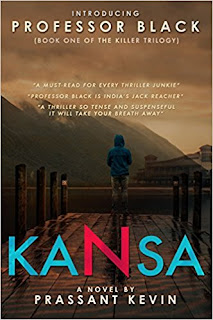 Blurb : OVER A SPAN OF TEN YEARS, HE KILLED FORTY PREGNANT WOMEN AND THEN VANISHED WITHOUT A TRACE. AFTER FIVE YEARS OF SILENCE, HE IS BACK AGAIN, SEEKING HIS NEXT VICTIM. ONLY ONE MAN CAN STOP HIM - PROFESSOR BLACK. Maher was found unconscious in the middle of the highway and later, in the hospital, she revealed that she had escaped from a killer's house. All the details and patterns matched the serial killer 'Kansa,' who had disappeared five years ago after murdering forty pregnant women. ACP Saargi Desai was assigned to the case. She appealed to her department to bring back Professor Black to help her catch the killer. The Professor, who had a haunting past that had kept him away from the world of crime and investigation for several years, was not willing to take on this case. But the ACP managed to convince him to get on board just for this one last time. Soon after agreeing to help, the Professor realized that for the first time in his life, he had met his match. As he dug deeper into the case, everything got dirtier, the stakes went higher, and nothing was what it seemed.

Review : Cover of the book is amazing and nicely designed, now let's talk about the book.
"KANSA" I know after hearing this name what first comes to our mind, well the book is well-written and the characterization is nicely maintained by the Author Prassant Kevin.
The Story starts with a couple named  Neil and Radhika who was traveling in a car after attending the marriage of Neil's sister... While they travel their car met with an accident  and their car rolled on the road ...the couples  got injured by that accident... When Neil back to his conscious found  a girl's body which was laid in the middle of the road. they confirmed that the girl is alive and they immediately called the Ambulance and informed about this to the Police.
And they admitted that girl into the hospital where Doctor have checked her.
on the other side of this Saargi, a Police officer gathered information about this case wit the help of a constable.
A boy in his teenage fell in love with this girl. They both visits  their relatives in the vacation. To tell about the boy , his grandfather was a writer and he used to narrates the story to this boy. In later days , he is known as professor black.
Professor Black was a knowledgeable,very intelligent and an enthusiastic person.. Because of this quality Saargi thought to work with him on this case to caught KANSA. Maher narrated her full story to professor and professor did a promise that he will catch the KANSA.

Will they succeed in this case or not?
When you hold this book , you will experience lots of day today life's events in this story..
I really enjoyed the book and suggest all the readers to read this book.
Ratings:

Order it from Amazon KANSA