Review of The revenge of Gandhi's followers

Review - The revenge of Gandhi's followers 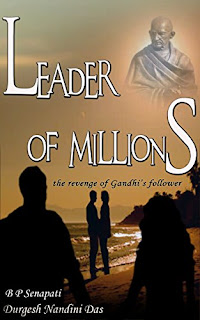 
Blurb: Vijay wasn't normal. He was a man with different thoughts, he had every symptom of a great man, still he lived with his mediocre dreams to get a job and then marry his childhood sweetheart. After few years of job experience wanted to establish his own business like millions of other, but fate had some different plans. Our corrupt system forced him to enter into the dirty game of politics. He gained power to avenge his antagonists, but being a Gandhian, his strategy was something unusual . . . his revenge wasn't ordinary . . .

Review: The Revenge Of Gandhi’s Followers by B.P. Senapati and Durgesh Nandini Das is a romantic thriller story that aims to inspire the readers to fight against injustice and corruption and fight for their rights.
The story begins with an amazing prologue section in which a young man called Jesse, was  reading a book named "The Revenge Of Gandhi's Followers By Rakesh".
The story of the book revolves around five friends Rakesh, Vijay, Priya, Ishita, and Rashmi. the author had focused on two main characters of the book, Vijay, and Priya. Rakesh is the narrator of the book and narrates the story of his best friend Vijay's real life incidents.
Vijay and Priya became friends at first sight but yes that wasn't only a friendship as everyone from the classroom and even the family members thought that  they both loves each other from their childhood... In contrast they behaved like they were just a friends nothing more than that...
Vijay's family liked Priya and treats her like their own daughter... Priya resembles them their own daughter who they lost recently. Priya's family also liked Vijay and they also treat him like their own son, the bonding between Vijay and Priya and their family was became even more stronger than before..
Priya lost her parents when she returned from a picnic. she came to  know about this when she and her friends including Vijay went to her house to drop her from the picnic.. She had seen the dead body of her parents which was wrapped with white clothes.. After losing her parents she started to live at Vijay's house.
Vijay's Parents treats her same as they do with Vijay.  Vijay's Father gave Pocket money to both of them which brings a smile on Priya's face.
The turning point was when Police had arrested Vijay and Priya from park when they were kissing each other and the lady constable treated Priya very badly which hurts Vijay more, Police had released them after taking some money as bribe from Vija's Dad which was nothing but corruption which was noted by Vijay. And Vijay requested  Priya to become an IAS officer to seek revenge and purify the foulness of the nation. Will they succeed in their attempts or will the idea back stab their hopes? to know that you have to read this book.
The language used by the author is very simple and characterization is also well maintained by the author, I liked the character of Vijay as he stood perfectly as the lead Hero of the story who struggles for justice at all stages.
Every reader can read this for good subject.
Ratings:
Cover: 4/5
Blurb : 3.5/5
Story : 4/5
Overall : 4/5
Buy the book from Amazon : The revenge of Gandhi's follower