The Three Psychos by Yash Pawaskar 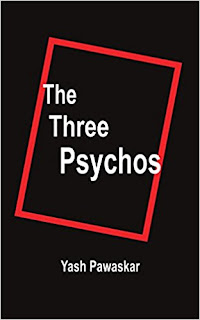 Blurb :  Three Thrilling Stories, One Gripping Novel. In the first tale, a naked man is trapped inside a white box. His only company: 'DE22912'. How long can he survive?
The second story, 'Patient Number 9', is about a hospitalized patient who must save Earth from an alien attack by blue pig-like creatures. The countdown has just begun.
In the third narrative, an angry sixteen-year-old gets hold of a loaded revolver and is determined to make use of all 'Six Bullets'. And no, it's not a toy. The three psychos are part of a connected universe, set in a novel with innovative storytelling, witty narration and an entertaining mix of thrill, humour and drama.

Review : Let's talk about the cover first. It is simple and looks good but it could have been better for sure ( From my point of view). This is the first time I have read Yash Pawaskar's book, and I would love to read many more books by him. The Three Psychos consists of three stories which are unique and different from each other. This creates interest in the mind of the reader and I couldn't keep the book down before finishing it. I enjoyed the book whole heartedly. Now let's talk about the content of the book. The first story is of a naked man who is trapped inside a box. The title of this story is DE22912 which you will understand after reading it. the story revolves around a guy called "Alex" who treats others including his girlfriend in a wrong-way. Thus for taking revenge, someone traps him in a box so that he goes through the same suffering and pain. The second story revolves around a guy called "Number 9". Yes this is the name by which the central character is known in the hospital, and he imagines a creature who messes around with his life. He calls him Shahenshah but the fact is that he is undergoing menta trauma and is suffering from ac accute mental disease due to which he has lost his memory ...well do read the book to know more about this story. The third story revolves around the sixteen-year-old boy who shot six people around him including his father on his sixteenth birthday. He uses a loaded gun with six bullets and he used all of them, well who they are to whom he shot with remain five bullets you have to read the book. I must say each story has a different concept and all of them are equally well written. On whole, this is a very entertaining book. I would love to read another book by Yash Pawaskar.

Order this book from Amazon : The Three Psychos