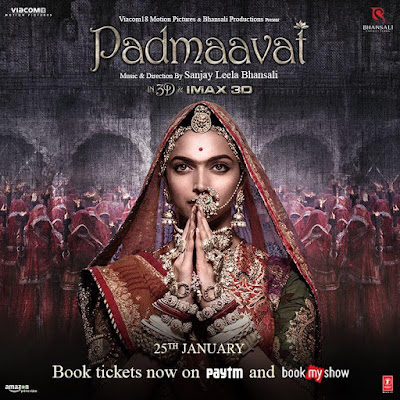 Director :
Sanjay Leela Bhansali
Producer :
Sanjay Leela Bhansali
Shobha Sant
Music Director : Sanchit Balhara
Sanjay Leela Bhansali
Cinematography :
Sudeep Chatterjee
Star cast:
SYNOPSIS: Set in 1303 AD medieval India, Padmaavat is the story of honour, valour and obsession. Queen Padmavati is known for her exceptional beauty along with a strong sense of justice and is the wife of Maharawal Ratan Singh and pride of the Kingdom of Chittor, a prosperous kingdom in the north west of India.
The legend of her beauty reaches the reigning sultan of Hindustan-Allaudin Khilji. The sultan who is a tyrant, is fixated with wanting anything that is of exceptional beauty for himself. He lays siege on the impregnable fortress of Chittorgarh.
After a gruelling 6 months, he returns empty handed. He becomes obsessed and now wants to capture Chittor and its Queen at any cost. He returns with a bigger army and raging fury. He attacks Chittor with brutal force and a bloody and fearsome battle takes place between the righteous Maharawal Ratan Singh defending his kingdom and the honour of his Queen and Sultan Allaudin Khilji. Khilji manages to breach the fortress but it goes in vain as the Queen chooses to make the ultimate sacrifice to protect her dignity.

Review :
Introduction: What can I say about this movie, whatever I would say will be less to the effort that Director Bhansali has put into this? There were lots of outrage against the movie, many wanted to kill or hang the Director and the actors of the movie, but after watching it I salute Bhansali who has beautifully directed the movie. The movie celebrates the pride of Chittor Rajpoot and Rajpootana, the movie also celebrates the pride of Chittor women.

Story: The story of the movie is more or less already in the public domain. You can easily google and find out about Queen Padmavati. But let me tell you what is there in the movie.
Alauddin Khilji (Ranvir Singh) becomes the Sultan of Khilji dynasty by killing his uncle Jalaluddin Khilji( played by Raja Murad), one day Alauddin comes to know that there is one of the most beautiful women in Chittor called Padmavati. Upon hearing this he started dreaming about Padamavati and wanted to make her his queen. Will he succeed in his dream or not for that you will have to watch the movie.

Acting: Deepika Padukone in the role of Queen Padmavati has done a superb job. She has completely come out as Queen Padmavati.
Ranveer Singh in the role of Alauddin Khilji has done a brilliant job, acting-wise this is again an award-winning performance by him.  This is one of the most negative character played by an actor on the screen. Don’t know why he chose this role. Does he choose challenge over goodness?
Shahid Kapoor as King Ratan Singh has impressed me a lot, he has not only done the complete justice to the character but has taken the applaud from the audience as well. In the time to come, this movie will be remembered for Shahid Kapoor’s brilliant work.

Direction: The movie is Directed by Sanjay Leela Bhansali. His first movie was Khamoshi in the year 1996, it’s been almost 25 years and in the last 25 years many directors came and disappeared due to lack of understanding of cinema or lack of filmmaking skill and in some cases both, but Bhansali is different from those, he is the one who does not only know about cinema but he has the best filmmaking skill as well. By heart, he is a musician and that is an add-on to his filmmaking skill.

Final Verdict: The movie will be remembered as one of finest work by an Indian filmmaker.