The book is provided by Arudhaa Club 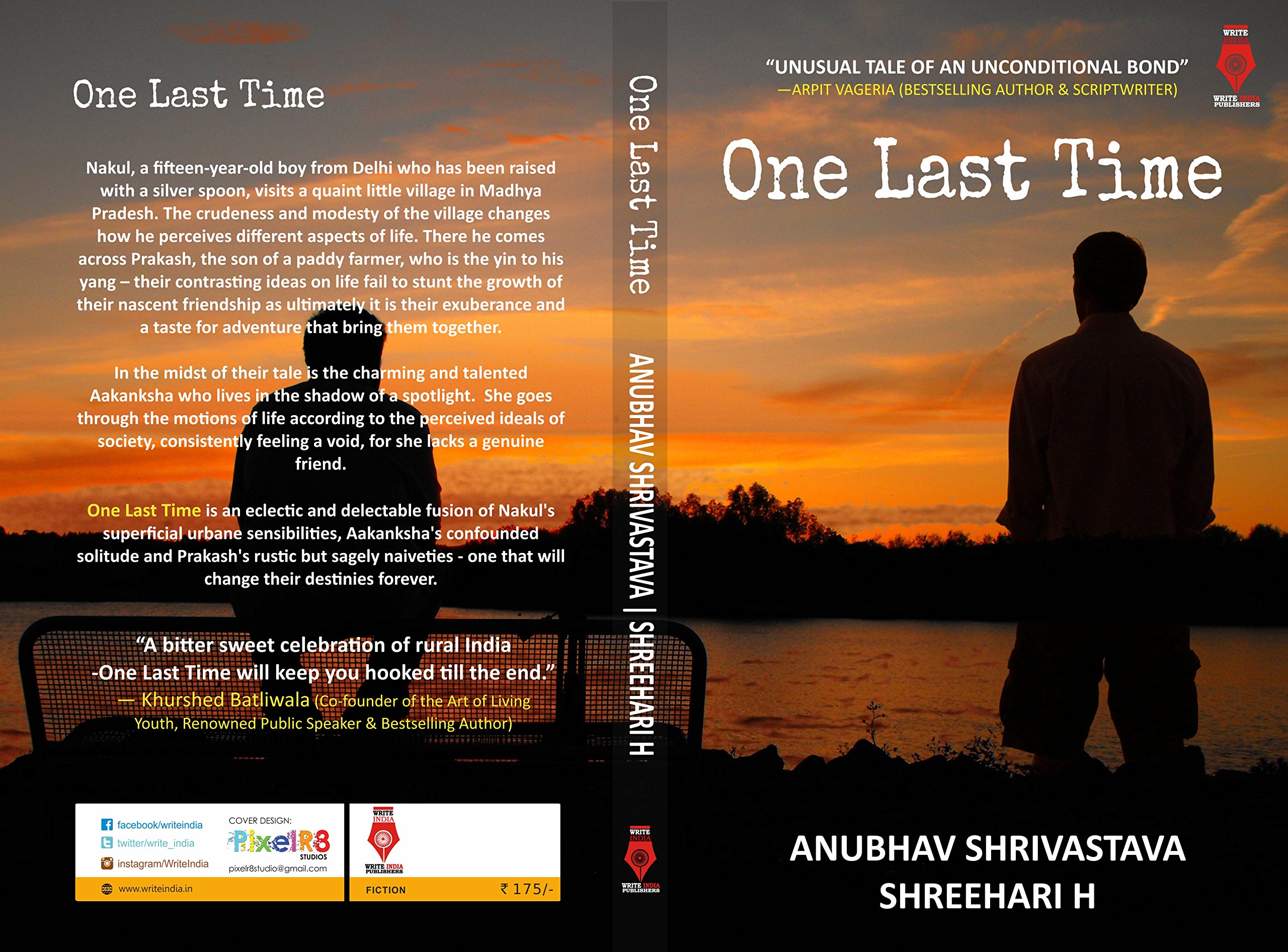 
Blurb :
Nakul, a fifteen-year- old boy from Delhi who has been raised with a silver spoon, visits a quaint little village in Madhya Pradesh. The crudeness and modesty of the village changes how he perceives different aspects of life. There he comes across Prakash, the son of a paddy farmer, who is the yin to his yang - their contrasting ideas on life fail to stunt the growth of their nascent friendship as ultimately it is their exuberance and a taste for adventure that bring them together. In the midst of their tale is the charming and talented Aakanksha who lives in the shadow of a spotlight. She goes through the motions of life according to the perceived ideals of society, consistently feeling a void, for she lacks a genuine friend. One Last Time is an eclectic and delectable fusion of Nakul's superficial urbane sensibilities, Aakanksha's confounded solitude and Prakash's rustic but sagely naiveties - one that will change their destinies forever.

Cover & Title:
Let's talk about the cover of the book first. The book cover has well designed and looks great. "One Last Time" the title of the book itself shows that it is somewhat quite unique.

Plot/Story
Let's talk about the content of the book which is just amazing I really loved it a lot.
The story gets started with a Fifteen Years old Boy Nakul who was traveling to His  native Village with her grandmother through train during his School vacation after a hard attempt too convince his parents his grandmother got succeeded to take Nakul to the village. Nakul's Parents were a C.A by profession and his Mother was quite a strict women but at the ame time she loved Nakul very much and his Father was very soft soul by nature and very close to Nakul.
Nakul and his Parents were living in Delhi the lifestyle of them were totally different from the Village Peoples.
Nakul was going to spend his vacation in one of the villages of Madhya Pradesh called Bhadroli where there is a surprising Journey was waiting for Nakul.
After so many hours of Traveling Nakul finally reached to Bhadroli and while traveling to His Grandmother's house he saw a Boy, an Almond eyed boy who was also staring at Nakul as well, Nakul wasn't aware that the boy who was staring at Nakul was going to become his best friend one day.
Nakul's Grandmother requested Nakul to go to the paddy field to have a look around while walking around the paddy field he saw the same Almond eyed boy while he was handling his cart.
Finally, that boy started to talk to Nakul in Local language. and introduced himself His Name was Prakash a kid of one Farmer of Bhadroli who helps his Father in Paddy field who doesn't go to any school, he was two years older than Nakul, Nakul and Prakash had the good and interesting conversation and Prakash also taken him to his house where Prakash's mother welcomed Nakul and they talked much and they  had Sugarcane sticks, Nakul really enjoyed a lot on that day, and they both Nakul and Prakash use to spend their time together most of the time and their bonding becomes more stronger and this is how they came close to each other.
Nakul really liked his company and Prakash too; they played games like Pitts and antakshari by which Nakul enjoyed very well.
After spending his vacation he came to Delhi again but he Promised Prakash that he will return to Bhadroli again to do all the funny and joyful stuff which makes him happy. Nakul joined his school again and there he starts talking to the most beautiful girl in the school Akanksha who was the topper of the school and Good at Dance, and Nakul was the Captain of the basketball team. Nakul shared all his memory and about Prakash and Bhadroli with Akanksha and they became friends.
Nakul requested to his mother that he wanted to spend his School vacation in Bhadroli again, his mother kept one condition in front of Nakul if he scores 80% in final exam of 9th standard then only he can go and spend his vacation in Bhadroli.
Nakul worked hard and took the help from the topper of the class Akanksha with her notes and by studying in the library with Akanksha, finally he scored 87% in the exam. As a result
Nakul allowed to go to Bhadroli again and met his friend Prakash who was also happy on seeing him in Bhadroli, and they started to spend their time together and this time Prakash had planned two special surprises for Nakul and Nakul also brought some surprise gift from him.
Prakash taught him how to milk a cow and They both had a ride on Bullock cart and Prakash enjoyed it very much and Nakul had gifted a three set of the books related to English speaking course, and Prakash liked it very much, and also take some classes of Prakash of English in which Nakul taught him about English.
Nakul returned Delhi after spending his vacation in Bhadroli and joined his school where he talks and spend a time with Akanksha yes they both loved each other internally but they didn't confess.
Nakul was thinking to spend this Vacation too in Bhadroli and that's why he was more focused on his studies with Akanksha and started preparing for his final exams.
One day he got a call from his grandmother and she told him about Prakash that Prakash has left Bhadroli. after hearing this Nakul became sad but his father taught him something important about the life. and Nakul just wanted to meet Prakash for One Last Time.
Will Nakul meet Prakash again? Will they spend their time together again? To know all the answer of this question you have to read this wonderful book “One Last Time”

Positive Points
I must say both the Authors had worked very hard to make this book marvelous which brings a smile on face those who read this book, which is not just a book but also a story of true friendship, This Book kept me hooked till the end, and I damn sure you can’t resist yourself by turning the page. Anubhav Shrivastava & Shreehari H has written this book beautifully, and the characterization was just amazing, the location used by the author was also amazing. Plot was amazing and flowing with every chapter of the book, I loved the way both author described Nakul and Prakash and the way they connected with each other.

Negative Points: None (From My point of view)

Recommendation: Those who are believing in Friendship can read this Book

Buy it From Amazon
One Last Time


About the Author : Anubhav Shrivastava graduated with a B.Tech in Electrical and Electronics from Manipal Institute of Institute of Technology in the year 2015. He is extremely passionate about cricket and movies.He has previously worked as a Consultant in Fractal Analytics and currently works in OLA.